The LearnFast programs are based on over 40 years of scientific research by the world’s foremost neuroscience experts.

There has been an explosion in knowledge over the last few decade about how our brains’ learn and this has been built into all the LearnFast Programs – Fast ForWord Language & Cognitive Enhancement, Fast ForWord Reading Development, Reading Assistant Plus (RA+), Cogmed, Kiko's Thinking Time and Nervanix Attention Technology.

The Fast ForWord programs evolved from the work of noted research scientists Drs. Michael Merzenich and Bill Jenkins at the University of California, San Francisco, and Drs. Paula Tallal and Steven Miller at Rutgers University.

New insights into how brains develop

Dr. Merzenich, who is a member of the National Academy of Sciences and is also a winner of the Kavli Prize for Neuroscience, and Dr. Jenkins are internationally known for their research in the science of brain plasticity, the understanding that the brain changes as we learn new skills.

Dr Tallal and Dr Miller are experts in research on the neurological basis of language and reading development and their disorders, such as dyslexia.

Dr. Tallal is a co-director of the Centre for Molecular and Behavioral Neuroscience at Rutgers and an active participant on many scientific advisory boards and government committees for both developmental language disorders and learning disabilities. She has published over 150 papers on the topic of language and learning and is the recipient of national and international honors. Dr Tallal has presented as an expert on Dyslexia to the USA Congress.

Dr. Miller is a neuroscientist and education technology innovator. He has taught undergraduate and graduate courses and has extensive experience in research programs in neuroscience and cognitive neuropsychology including large multi-site research initiatives on the neural basis of brain plasticity and learning.

He has authored or co-authored more than 100 publications including numerous research studies, commercial software programs and U.S. Patents.

We know from their research that the core cognitive attributes that define a student’s ability to benefit from classroom instruction can be improved through intensive intervention using advanced technologies, in the areas of Memory, Attention, Processing and Sequencing.

The scientists discovered that by using acoustically modified speech technology in an intensive, adaptive product, students could build a wide range of critical language and reading skills such as phonological awareness, phonemic awareness, fluency, vocabulary, comprehension, decoding, syntax, grammar, and other skills that had previously been inaccessible to them.

What is Brain Plasticity?

Many leading neuroscientists have described brain plasticity as the greatest discovery of our time.

It was previously believed that the pathways and circuits in our brains were genetically pre-determined and fixed. However, it is now well known that the brain has the ability to change, not only when it is developing from birth, but also in adulthood.

Neuroplasticity refers to the ability of the brain network, as a whole, to change. This allows for new connections and new neurons to form, leading to the creation of new pathways for communication between brain areas. 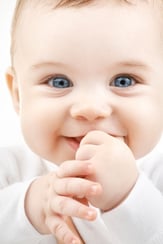 Neuroplasticity is exemplified most dramatically at the beginning of life (when the immature brain grows and organizes itself), as well as in response to brain injury. In the first two years of life, as new pieces of information (such as language and observations from surroundings) are continuously experienced for the first time, new neurons and pathways are formed enabling memory of this new information.

Neuroplasticity has also been widely recognized in people with brain injuries. In response to a repetitive activity, the brain is able to compensate for damage to one area by recognizing and forming new connections between intact neurons in a non-damaged area. For example, partial paralysis can be overcome as a result of neuroplasticity – continuous and repetitive activity of an immobile limb can over time lead to new connections and the memory of movement.

Plasticity through repetition and practice – musicians are an example

It is not only in infancy and in response to brain damage that the effects of neuroplasticity can be observed. Extensive scientific research has shown that neurons are constantly connecting and forming pathways in response to learning. For example, it has been shown that the grey matter in areas of the brain involved in playing a musical instrument (motor regions and temporal areas) are larger in professional musicians than non-musicians, which demonstrates plasticity through repetition and practice.

A similar situation expounds in relation to language – for example, constant and repetitive practice of the underlying elements of speech can lead to the formation of new neuronal connections, thus allowing increased pathways for better use of language.

Synaptic plasticity refers to the ability of the connections between already existing neurons to increase in strength. This is slightly more complex, but is also believed to increase and facilitate learning and memory.

When you experience two things simultaneously the brain wires them together.

The cerebral cortex spreads over the brain like a helmet and is the largest part of the human brain. It is associated with higher brain function such as thought and action. The cerebral cortex is divided into four sections, called “lobes”.Frontal Lobe:The Frontal lobe contains the motor cortex and is associated with muscle movement and parts of speech. 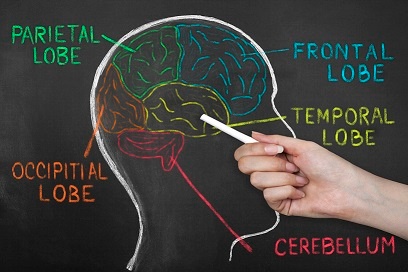 Occipital Lobe: The occipital lobe contains the visual cortex and is associated with receiving and processing visual information.

Temporal Lobe: The temporal lobe contains the auditory cortex and is associated with perception and recognition of auditory stimuli, memory, and speech.

Cerebellum: The Cerebellum is the area of the brain that controls motor movement, coordination, balance and equilibrium. It relays information between muscles and areas of the cerebral cortex involved in motor control.

Within the various areas of the brain, each region undertakes a different language or learning task. These regions do not work in isolation, but rather are connected by a series of neurons that allow information to be relayed between them. 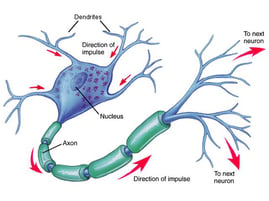 Anatomy of a Neuron

The neuron is a type of cell found in the brain that specialises in communication. A neuron is made up of a cell body, dendrites, an axon and axon terminal. Using all these different parts, a neuron can send and receive information.Cell bodyThe cell body (called the soma) contains a nucleus. The nucleus stores DNA and is the control centre of the neuron. In certain situations the DNA can reproduce itself and the nucleus can split into two. This is how new neurons are formed.

Dendrites branch off the cell body. The main function of dendrites is to RECEIVE messages from other neurons and relay those messages to the cell body.

The axon is a long thin fiber that extends away from the cell body (like a string on a balloon). Axons carry information away from the cell body and SEND that information to the axon terminal. The message that is sent down the axon is in the form of an electrical current, which is called an action potential. The axon is surrounded by fatty tissue called the myelin sheath, which keeps the axon insulated so that electrical messages can be sent quickly and easily. 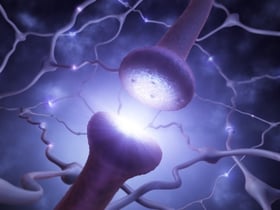 When the action potential arrives at the axon terminal, it causes sacs to release chemicals called neurotransmitters. In order to relay information to the next neuron, these chemicals cross the synapse and attach to the dendrites of the next neuron. There are many different types of neurotransmitters in the brain. Some of the common ones include dopamine, acetyelcholine and serotonin (otherwise known as 5-HT).

LearnFast was established to bring the world’s best evidence-based learning programs to learners in schools, professional clinics, homes and workplaces.
We are driven by the desire to help as many people as possible overcome learning and English Language communication difficulties - reading, listening, writing and speaking .
We are passionate about helping every Learner achieve her/his potential. This is reflected in everything we do, from the people we hire, to the way the programs are implemented.